Wordle as a Soliloquy Comparison Tool

Wordle as a Soliloquy Comparison Tool

Wordle works chiefly as a word frequency analysis tool. Words used more appear larger. By looking at the resulting wordle graphic one can visualize presumably the important of the words to the speaker, but also get insight into the mindset.

I think the same approach could be used to study literature characters. Keeping in mind that the resulting wordles are a direct function of the text supplied, let’s look at the difference between Shakespeare’s Brutus and Hamlet as they deliver soliloquys at various points in their respective settings.

Below is the resulting wordle and text that I used as a source. Because I was trying to compare the results and was interested in the differences in actual text, I made all the font, layout and color parameters the same. 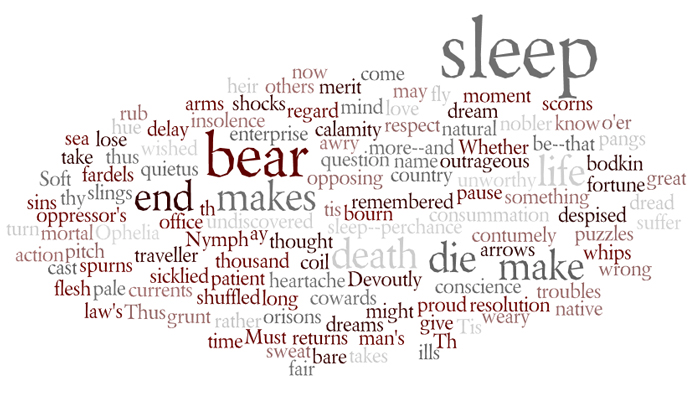 To be, or not to be–that is the question:
Whether ’tis nobler in the mind to suffer
The slings and arrows of outrageous fortune
Or to take arms against a sea of troubles
And by opposing end them. To die, to sleep–
No more–and by a sleep to say we end
The heartache, and the thousand natural shocks
That flesh is heir to. ‘Tis a consummation
Devoutly to be wished. To die, to sleep–
To sleep–perchance to dream: ay, there’s the rub,
For in that sleep of death what dreams may come
When we have shuffled off this mortal coil,
Must give us pause. There’s the respect
That makes calamity of so long life.
For who would bear the whips and scorns of time,
Th’ oppressor’s wrong, the proud man’s contumely
The pangs of despised love, the law’s delay,
The insolence of office, and the spurns
That patient merit of th’ unworthy takes,
When he himself might his quietus make
With a bare bodkin? Who would fardels bear,
To grunt and sweat under a weary life,
But that the dread of something after death,
The undiscovered country, from whose bourn
No traveller returns, puzzles the will,
And makes us rather bear those ills we have
Than fly to others that we know not of?
Thus conscience does make cowards of us all,
And thus the native hue of resolution
Is sicklied o’er with the pale cast of thought,
And enterprise of great pitch and moment
With this regard their currents turn awry
And lose the name of action. — Soft you now,
The fair Ophelia! — Nymph, in thy orisons
Be all my sins remembered.

It must be by his death: and for my part,
I know no personal cause to spurn at him,
But for the general. He would be crown’d:
How that might change his nature, there’s the question.
It is the bright day that brings forth the adder;
And that craves wary walking. Crown him?–that;–
And then, I grant, we put a sting in him,
That at his will he may do danger with.
The abuse of greatness is, when it disjoins
Remorse from power: and, to speak truth of Caesar,
I have not known when his affections sway’d
More than his reason. But ’tis a common proof,
That lowliness is young ambition’s ladder,
Whereto the climber-upward turns his face;
But when he once attains the upmost round.
He then unto the ladder turns his back,
Looks in the clouds, scorning the base degrees
By which he did ascend. So Caesar may.
Then, lest he may, prevent. And, since the quarrel
Will bear no colour for the thing he is,
Fashion it thus; that what he is, augmented,
Would run to these and these extremities:
And therefore think him as a serpent’s egg
Which, hatch’d, would, as his kind, grow mischievous,
And kill him in the shell.
No, not an oath: if not the face of men,
The sufferance of our souls, the time’s abuse,–
If these be motives weak, break off betimes,
And every man hence to his idle bed;
So let high-sighted tyranny range on,
Till each man drop by lottery. But if these,
As I am sure they do, bear fire enough
To kindle cowards and to steel with valour
The melting spirits of women, then, countrymen,
What need we any spur but our own cause,
To prick us to redress? what other bond
Than secret Romans, that have spoke the word,
And will not palter? and what other oath
Than honesty to honesty engaged,
That this shall be, or we will fall for it?
Swear priests and cowards and men cautelous,
Old feeble carrions and such suffering souls
That welcome wrongs; unto bad causes swear
Such creatures as men doubt; but do not stain
The even virtue of our enterprise,
Nor the insuppressive mettle of our spirits,
To think that or our cause or our performance
Did need an oath; when every drop of blood
That every Roman bears, and nobly bears,
Is guilty of a several bastardy,
If he do break the smallest particle
Of any promise that hath pass’d from him.
Our course will seem too bloody, Caius Cassius,
To cut the head off and then hack the limbs,
Like wrath in death and envy afterwards;
For Antony is but a limb of Caesar:
Let us be sacrificers, but not butchers, Caius.
We all stand up against the spirit of Caesar;
And in the spirit of men there is no blood:
O, that we then could come by Caesar’s spirit,
And not dismember Caesar! But, alas,
Caesar must bleed for it! And, gentle friends,
Let’s kill him boldly, but not wrathfully;
Let’s carve him as a dish fit for the gods,
Not hew him as a carcass fit for hounds:
And let our hearts, as subtle masters do,
Stir up their servants to an act of rage,
And after seem to chide ’em. This shall make
Our purpose necessary and not envious:
Which so appearing to the common eyes,
We shall be call’d purgers, not murderers.
And for Mark Antony, think not of him;
For he can do no more than Caesar’s arm
When Caesar’s head is off.

About the Author: Dan LaSota

Dan's background is seasoned by physics and astronomy, public government, teaching, software development and adventure. He's putting his M.Ed. in Online Innovative Design to work building remote control science labs at the University of Alaska Fairbanks, and lots of other fun courses too!